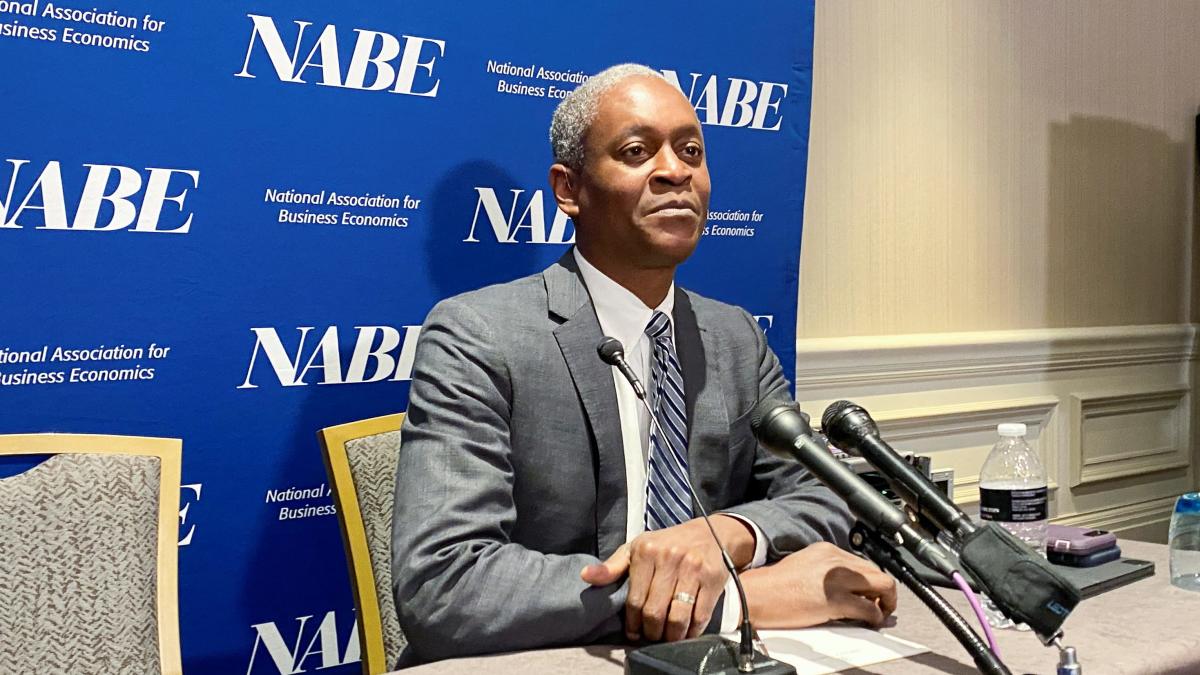 – But of course, we started seeing those declines a day after the Fed made its announcement. In fact, we’re just less than a week removed from the Fed’s largest rate hike in over 20 years, and now there’s already discussion about what’s going to happen next. For that, let’s bring in our very own Brian Cheung with the details. Brian.

BRIAN CHEUNG: Hi, [? Rochelle. ?] Well, I’m here in Amelia Island, Florida. This is where the Atlanta Fed holds its annual financial markets conference. It’s normally a quiet conference tucked away in a quiet part of Florida, but very much a closely watched conference this year because of the flurry of Fed gotten commentary that we’ve just since the Fed’s meeting last week, where we got that 50 basis point increase. Again, it’s the largest single meeting increase since May of 2000.

We heard some commentary from the Atlanta Fed president himself, Raphael Bostic, this morning, saying he doesn’t see the case for an even larger move of 75 basis points, at least right now, but said he doesn’t want to take anything off the table. And at a separate media engagement, we heard Minneapolis Fed President Neel Kashkari say that he’s confident that the Federal Reserve can take the actions needed to get inflation back down to its 2% target. Again, that’s the ultimate goal here, even at the risk of perhaps tilting the US economy into a recession.

Now of course, there’s going to be a number of other commentary that we’re expected to hear from the conference throughout the rest of it. That’s going to be tomorrow, and then also Wednesday. And right here on Yahoo Finance, tomorrow we’re going to have a conversation with Cleveland Fed President Loretta Mester in a first on Yahoo Finance interview. That’s at 9:30. We’ll also have the Atlanta Fed President Raphael Bostic in a televised interview, which will be airing around 3:45 PM tomorrow. And of course, guys, you won’t want to miss that. It’ll be right here on Yahoo Finance.

– Looking forward to that, Brian. Meanwhile, Fed officials continue to debate the merits of adopting a digital version of the greenback. What are you hearing there?

BRIAN CHEUNG: Yeah. Well, obviously, the financial markets conference means that they’re talking about a lot of in the weeds type of Fed policies. And even though all eyes are on interest rates and what the Fed is doing on inflation, there’s also a lot of focus on whether or not the Fed could introduce a digital version of the greenback. Again, this is a topic that’s already been teased by the Fed. They released a white paper not long ago, asking for public comment on whether or not they should release a digital dollar.

And the pros on one side would be maybe this would make monetary policy a little bit easier. It would help to get more unbanked Americans into a digital wallet. And then it could also kind of increase the ability of the Federal Reserve to l of assess exactly where reserves are in the system. But the cons would be, obviously, security, and then whether or not it could take some steam out of the banking system, which relies on deposits to make their loans.

Now, David Mills, who is from the Federal Reserve, made a presentation today. Interesting to see a lot of these solicited comments in the conference today seem to be on the negative side, suggesting that maybe the Fed is perhaps a bit over its heels in terms of trying to launch this type of technology. The Fed historically very slow to those types of things. But again, very sunny outlook here on the Amelia Island. So perhaps the Fed has a little bit of a sunny optimism in releasing something like that, as well.

– I like the optimistic tone there, Brian. Thanks so much.