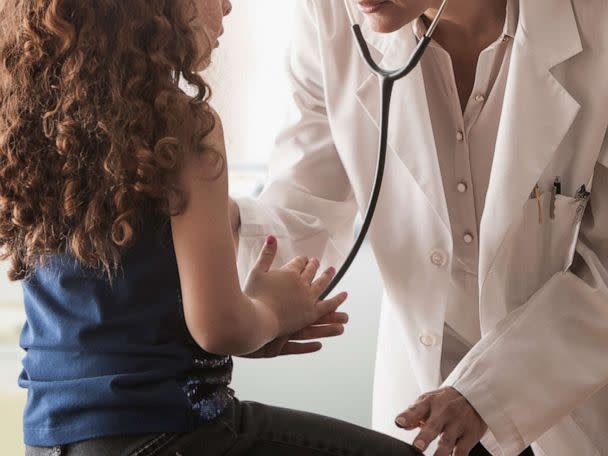 Parents are being asked to look out for symptoms of hepatitis in their kids as an unexplained outbreak of cases in children continues across the United States.

The Centers for Disease Control and Prevention (CDC) issued a health alert Tuesday aimed at educating parents on symptoms.

“Hearing about severe liver disease in children can be concerned. If you have any questions about your child’s health, call your child’s healthcare provider,” the CDC wrote, adding that parents should be aware of the symptoms associated with liver inflammation, including fever, fatigue, nausea, and jaundice, which is yellowing of the skin.

Hepatitis means inflammation of the liver. It can be caused by heavy alcohol use, toxins, some medications and medical conditions and is often caused by a virus, according to the CDC.

Here are five things to know about the CDC’s alert on hepatitis and kids and the outbreak.

1. The latest hepatitis outbreak in kids is global.

In April, researchers in the United States and Europe announced they were investigating small clusters of the cases emerging across the globe.

As of this week, the World Health Organization (WHO) says more than 340 probable cases of hepatitis in children have been reported in 20 countries.

In the US, there are at least 109 confirmed cases with five deaths in over 20 states and Puerto Rico, according to the CDC.

2. The cause of the outbreak remains unknown.

The cause of the reported cases of hepatitis in children in the US remains unknown, according to the CDC.

“We do not know and are investigating what role other factors play in this illness, such exposure to toxins or other infections that the children might have,” the agency wrote in its latest health alert, also adding it is “not unusual” for the cause of hepatitis cases in children to remain unknown.

MORE: More children are developing hepatitis and researchers want to know why

Some of the children who had hepatitis also had adenovirus type 41, a type of virus that can cause severe stomach illness in children, according to the CDC.

Adenoviruses are different types of viruses that can cause illnesses ranging from the common cold to acute bronchitis, pneumonia, pink eye and acute gastroenteritis, or inflammation of the stomach, according to the CDC.

3. The hepatitis vaccine is not protective against this latest outbreak.

Hepatitis viruses are the most common cause of hepatitis in the world, including hepatitis A, B, and C, but they’ve been ruled out in the latest outbreak.

The strain of hepatitis seen in this vaccine is not one covered by the hepatitis vaccine that kids receive, according to Dr. Jennifer Ashton, ABC News chief medical correspondent.

“These cases of hepatitis are none of those [covered by the vaccine]so it’s really mystifying public health officials at this point,” Ashton said Wednesday on “Good Morning America.”

4. The hepatitis outbreak does not appear to be COVID-19-related.

Health officials do not believe the current outbreak in pediatric cases is linked to the novel coronavirus or the COVID-19 vaccine, according to Ashton.

“I just spoke to the CDC director, Dr. Rochelle Walensky, this morning,” Ashton said. “She wanted me to emphasize that the majority of these cases have been in children ages 2 to 5. These children, as we all know, are not eligible for the COVID vaccine, so this has nothing to do with the vaccine.”

5. Parents should call their pediatrician if symptoms appear.

The CDC has advised parents to be on the lookout for symptoms in their kids including fever and fatigue, nausea and vomiting, abdominal pain, joint pain, jaundice — a yellowing of the white part of the eyes or the skin — or a change in the color of urine or stool.

If any of those symptoms are present, parents should call their child’s pediatrician as quickly as possible, according to the CDC.

The agency also urges parents to make sure their child is up to date on all vaccinations and follow safety protocols, like washing hands often, avoiding people who are sick, covering their coughs and sneezes and avoiding touching the eyes, nose or mouth.

CDC issues alert for parents on outbreak of hepatitis among children. Here’s what to know originally appeared on goodmorningamerica.com