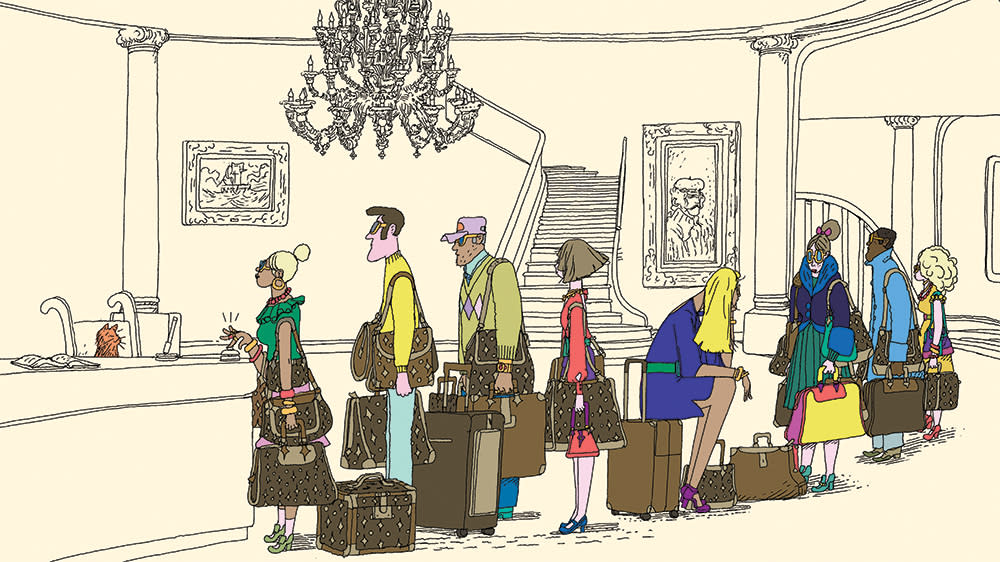 On one day in April 2020, American airports were so empty that the TSA screened around the same number as it might have in the late 1960s—just under 90,000, a figure down 90 percent from the more than 2 million who’d breezed through regularly every day a few months earlier. It’s startling, then, to compare figures now: According to the TSA, commercial airports have gained back more than half of those pre-pandemic fliers, and private-jet flights stateside are up 9.5 percent over last year, per business-aviation analysts at argus.

So travel is roaring back to life, flush with much-needed passengers—and cash. Isn’t that a good thing? The surge at the luxury end of the market should be a foolproof boon for trip-starved travelers and financially struggling operators. But it’s not. Instead, luxury travel’s travails showcase every major post-pandemic problem, a shorthand for the economy at large.

Take supply-chain issues. While giant cargo ships such as Ever Given finally arrived at dock, the challenge persists. In part, it’s thanks to China’s devotion to its lockdown-driven zero-Covid strategy and the shuttering of key ports there such as Yantian as a result. One luxe Oakland, Calif., hotel opened only half its rooms, and even then, a few weeks late, after a partial delivery of headboards from Asia; the 100-person Emerald Azzurri elite cruise ship took off for its maiden voyage with stopgap chairs and tables, purchased in a scramble from Ikea by the onboard hotel director.

But it’s more than freighters mucking up furniture deliveries: High-end resorts in many Caribbean destinations rely almost entirely on shipped-in foods and beverages, leaving gaps in menus and bar inventories. Insiders don’t expect things to resolve soon, either: In a survey by the American Hotel & Lodging Association (AHLA), more than a third of respondents expect the same problems to persist for at least another year.

For hospitality, there’s more to the supply chain than bottles of booze and bespoke chairs—it’s people, too. The industry long relied on a globe-trotting cabal of guests, but border closures kept many away during the pandemic. Exiling Russia from the global-payments system because of the war in Ukraine added an extra blow, likely to stop—or at least cull—one of luxury travel’s freest-spending clicks from roaming as they typically might.

Then there’s staff. Many luxe resorts in the US and the Caribbean have long operated on a two-season system: In the winter, the Caribbean’s peak, locals might work at five-star piles there before pinballing to, perhaps, a property in New England for the summer season. Again, that border-shuttering, coupled with a suspension of visa services, made that system virtually impossible. Almost no potential employee could score the J-1 paperwork needed to come here in 2020; numbers were barely better in 2021.

Even if hotels relied solely on local talent, they’re still struggling. “No one is offering you a drink at the pool or the beach,” says travel specialist Keith Waldon, of Texas-based Departure Lounge. “Covid meant people no longer wanted to be a waiter.”

“There are big issues brewing,” agrees Carl Gray, of Gray & Co., a private travel outfitter in Santa Monica, Calif. “Service is going to be forever redefined by this pandemic.” Per the AHLA in October 2021, 94 percent of those surveyed stateside said their hotels were understaffed and 96 percent of operators said they had open positions they were struggling to fill.

Yet even as service levels falter, rates have skyrocketed. Waldon says, “Prices have gone through the roof, especially in the US. A room in Florida that was $500 before is $3,000 now, and a lodge in Montana that was $1,200 per night will be $5,000. It’s nutty pricing.” Figures from STR, a global hospitality data and analytics company, show that rates are now markedly higher than they were in 2019, a banner year for travel. A night at a luxury property stateside cost $290 then and rose to $330 in 2021; in the first two months of 2022, it hit $366. (Numbers for luxury properties worldwide showed similar upticks.)

The reason is simple: demand. “We’ve been so isolated for two years, and we want to be around other humans, other cultures, so much. We’re a bit starved,” notes Gray—as the 81.5 percent of American travelers surveyed by Destination Analysts confirmed in January 2022.

So much for the problems. But what are the solutions, or how are the better operators parrying these pressures Departure Lounge’s Waldon says some of the higher-end resorts are capping occupancy at 70 percent this year instead of trying to sell out every room. Fewer guests might mean less profit, of course, but it’ll also allow their stretched-thin staff to deliver better service—and keep those guests happier for longer. Rancho Valencia in Rancho Santa Fe, Calif., opted for a 65 percent cap last year for exactly that reason, according to GM Laura McIver.

Mothballing some rooms for a while, or making sure they’re sold only as part of an easy-to-operate buyout, will continue. Adding a reservation system around the pool or reserving 25 percent of dining room space for last-minute decisions from on-property guests are both smart options Gray has seen appear in recent months. Brooke Lavery of Local Foreigner in New York says clients are forgiving when some effort’s made to offset shortages—but there’s a shortage limit: “People are sick of Covid excuses—you can’t get away with removing housekeeping services and blame Covid [now].”

The best option for both value and service? Undoubtedly, family-owned hotels that are more keenly aware of a guest’s lifetime worth versus any profit possible right now.

Vertical integration in training is essential to refill empty roles. Properties and chains with their own prep programs, such as the Royal Mansour in Marrakech, for example, will thrive, focusing more on honing, or even retraining, locally based talent—it retained its 600-strong staff throughout the pandemic and was primed to refresh their skill sets as soon as demand returned. The London-based Dorchester Collection, which runs properties such as the Beverly Hills Hotel, doesn’t just offer an extensive in-house training program: It sells its services via a namesake academy to other industries keen to import the polish of five-star hospitality. Thinking beyond simple training will be critical, too, according to Jeff Gurtman of consulting firm Coyle Hospitality, which works with the world’s top brands. “Luxury hotels are often located in high-rent urban and remote locations, and living costs for workers of all stripes will put hotels at a disadvantage,” he points out—so expect housing allowances or even on-property accommodation to become more commonplace to offset that.

One sweet spot? With business travel still sluggish, commercial legacy carriers are marked offering-down seats in their premium cabins—not only to tempt travelers to trade up from economy to business but also to trade down from a charter to first. So getting to and from that overpriced resort might become your favorite part of the journey.

Mark Ellwood is Robb Report’s editor at large and author of Bargain Fever: How to Shop in a Discounted World.