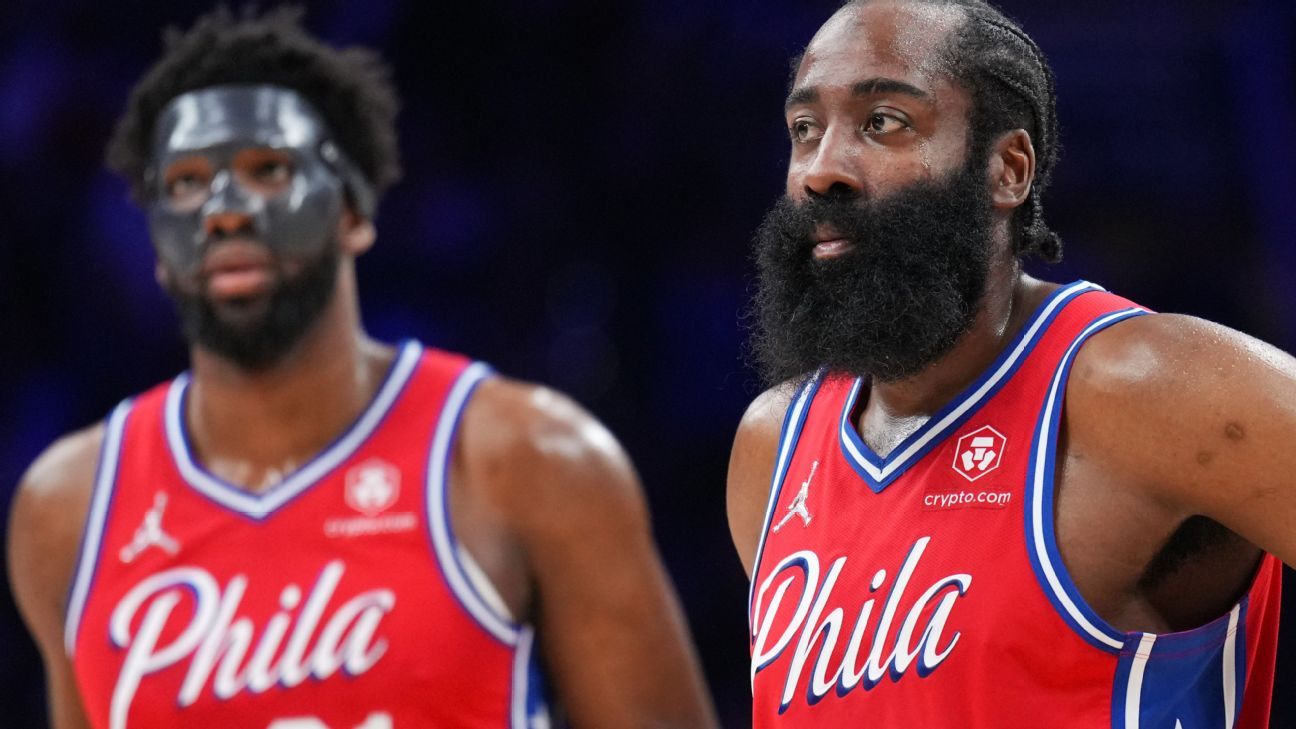 PHILADELPHIA — James Harden picked the perfect time to have his best game with the Philadelphia 76ers.

After declaring this series would return to Miami tied after the 76ers lost both games there to begin this best-of-7 affair, Harden poured in 31 points — including 16 in the fourth quarter — and hit 6 3-pointers — his most since arriving here three months ago — to lead the 76ers to a 116-108 victory over the Heat.

As a result, this series is, in fact, tied 2-2 heading back to Miami for Game 5 Tuesday night.

“We’re getting more confident as the series goes on,” said Harden, who finished the game with 31 points, seven rebounds, nine assists and six turnovers in 41 minutes. “Those first two games [were] to blur. But obviously, having Joel and having our full team, we kind of know what to expect.

“We know where to execute on both ends of the ball. It just makes the job a lot easier. Think about: We’re still a fairly new team. We’re damn near two months. So when we finally catch a rhythm and finally find something that works, Joel goes off for a couple games.

“So we’re finally settling into the series, and we’ve had some great things that have worked tonight and that we can capitalize off in Game 5.”

The thing that has worked the best for Philadelphia in its home games this series, compared to Games 1 and 2, was simply making shots. After going 14-for-64 from 3-point range in Miami, Philadelphia went 16-for-33 from behind the arc in both Games 3 and 4 — a 54-point swing — to flip this series around.

And it was Harden who delivered a few daggers down the stretch, hitting four triplets in the fourth quarter alone to help Philadelphia hold off Miami, which nearly pulled off a win despite its own awful shooting performance (7-for-35 from 3) behind Jimmy Butler’s spectacular 40-point performance.

“I just took what the defense gave me,” Harden said. “Same shots, just made some. Nothing really changed, man. I made some shots. That’s I mean, obviously that’s a game changer. But [I was] just being aggressive.”

Paired with another strong game from Joel Embiid (24 points, 11 rebounds, two assists) in his second game back from the facial fracture and concussion that cost him the first two games of this series and 18 points from Tyrese Maxey, it was enough to get Philadelphia back level with Miami as the series shifts back to South Beach.

“We need him to be aggressive,” 76ers forward Tobias Harris said. “But he does a great job of evaluating the game, [finding] where he can make plays where he can take shots. Tonight, he got going. You’re just seeing the confidence in him getting downhill, and then the three ball opening up for him.

“What we really need him to do on a nightly basis is what he does. Just be solid for us and be able to really pick apart the defense, and how they’re playing him. He sees so many defensive coverages out there on floor A lot of times they zone up the court as well, so sometimes it’s tough for him to be extremely aggressive on the offensive end. But when he’s in a groove like that, we just get him the ball and keep it going.”

Harden’s heroics helped mask some deficiencies within this performance for the 76ers. They once again threw the ball around, committing 17 turnovers that turned into 24 Miami points, which is how the Heat were able to stay in contact despite the 76ers shooting 54% from the field and against getting hot from 3.

Miami also had a 48-34 edge in points in the paint, and the 76ers were powerless to stop Butler throughout the game.

“He was tough,” 76ers coach Doc Rivers said. “He was tough. Listen, I gotta watch film. But he frustrated me tonight. [76ers assistant] Dan Burke was off the cliff almost.

“I mean, he made everything. You know what he did tonight? He went left a lot. That’s something that in the past he’s really not done. So we’re gonna have to figure that one out because he was tough and he scored on everyone. He didn’t care who it was, he was scoring. He’s tough.”

But, in the end, not tough enough to prevent the 76ers from doing what Harden said they would when they left the shores of Biscayne Bay four days ago: Tie this series up at two games apiece. And, with it now heading back to Miami, there’s one very big difference for Philadelphia moving forward.

“Joel’s gonna be on the plane,” Rivers said.